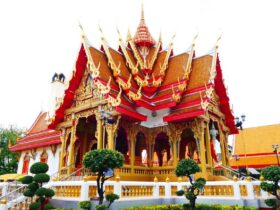 The Grand Palace is the official residence of the royal family of Thailand. The name of the Palace in Thai is Phra Borom Maha Ratcha Wang. It’s a complex of buildings located in Rattanakosin Island in the Phra Nakhon District of Bangkok. This has served as the official residence of the Kings of Thailand, its history starts from the reign of King Rama I in 1782. During subsequent reigns, many new constructions and buildings were built.

The Grand Palace is split into several blocks::

Although the Palace houses some of the royal offices, several of its rooms are open to the public as a history museum.

MAP OF THE GREAT PALACE

INTERESTING FACTS ABOUT THE GRAND PALACE

The Royal Pantheon is open only one day a year during the celebration of Chakri Dynasty Day, April 6.

The Grand Palace is the main attraction of its kind in Bangkok. Despite the fact that the entrance fee is rather expensive, this place is always crowded with tourists. You can make a stop here on your way to Suvarnabhumi airport because it’s only 35 km away. Remember to dress appropriately.

Be warned, some visitors report that the toilets throughout the complex might not be operational, use the ones on the right an the entrance. Let us know if this issue is fixed to update the information.

If you’re looking for somewhere to stay downtown near The Grand Palace, we recommend Mind Day Hostel Khaosan, only 200 baht per night.