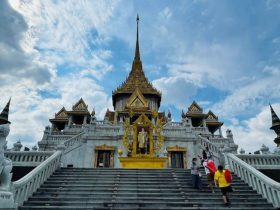 Suan Pakkad Palace Museum is one of the best examples of traditional Thai architecture in Bangkok. It consists of several two-story houses made of teak in the Thai style. All of the palace buildings are dedicated to housing museum collections – art and relics of the royal family. The collection includes Khmer sculptures, elements of ancient lacquerware, unusual shells and crystals. The collection of intricately decorated red and white Bronze Age vessels is quite interesting. They were found during excavations in the area of Ban Chiang (Northern Thailand).

The main building of the Museum complex was originally the residence of a noble family. Prince Chumphot, a famous art collector, disassembled it and moved it far to the south of Chiang Mai. The most impressive building on the palace grounds is the Lac Pavilion, which survives from Ayutthaya times – it is about 400 years old. It originally served as a library in a temple located between Ayutthaya and Bangpain.

The brilliant black and gold structure is a unique example of Siamese decorative art and the only building of its kind. Today, it continues to fascinate visitors not only with its perfect proportions, but also with its magnificent lacquer compositions with delicate gold patterns that cover the walls.

The strictly laid out gardens around the are a pleasant retreat amid the stuffiness and polluted air of Bangkok.

Other pavilions of Suan Pakkad Palace Museum house many objects of Thai material culture, the most valuable of which are Bronze Age pottery discovered during excavations in Banchiang, Khmer sculpture, Sangkhalok ceramics, and multi-colored Bengyarong ceramics. Other antiquities include musical instruments, beautifully crafted replicas of royal ships and unique ancient Vietnamese drums dating from the Dong Son era.

The pavilions also contain ancient Thai furniture, bronze and stone statues (of which Dwarawati-era and Khmer statues are considered the most remarkable), Chinese and Thai porcelain, swords that once belonged to Siamese warriors, and elaborate opahalas used by priests in performing Buddhist rituals.

Suan Pakkad Palace is the first museum in Thailand where the owner, their Royal Highness Prince and Princess Chumbhot of Nagar Swarga, decided to convert their private residence into a museum. It was opened in 1952.

The informal approach in organizing much of the exhibit reflects the personal tastes of the palace’s former owners.

HOW TO GET TO SUAN PAKKAD PALACE MUSEUM

Historical museum with old foreign and Thai exhibits. The museum consists of 8 houses in the traditional Thai style with various collections of exhibits, from ancient weapons to porcelain dishes. It is forbidden to take pictures of the exhibits. The museum will not be of interest to young children, but older people should be interested. The exhibits have signs in English.