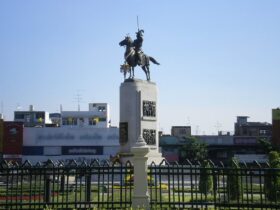 The Anusawari Chai Samoraphum or Victory Monument was built in 1941 under the premiership of Field Marshal Plaek Pibulsongkhram to honor the 160 troops, officers of police and citizens who battled for the Kingdom during the Indochina border conflict between Thailand and France.

As the Pacific War ended in 1945, Thailand was forced to give back the territories it had occupied to the French. There are plenty of locals who dislike this monument because it serves to remind them of a more somber and sorrowful period in Thai history.

The Monument was designed by Pum Malakul.

For those interested in the history of Thailand we can recommend a Bangkok Historical Tour. Visit top destinations such as Wat Paknam, Robinson Samut Prakan, Erawan Museum, and more! Book online with a discount.

Victory Monument is one of the most visited monuments in Bangkok because it is located at one of the busiest intersections of Phahoniothin, Phaya Thai and Ratchawithi roads.

This monument is not marked by landmarks, but the monument itself can be counted as a landmark, attracting many nighttime photographers to take pictures of it and the ambient traffic flow from the Skytrain Bridge above.

Scan this QR code to add Victory Monument to your phone

Victory Monument really opens up at night: there are some awesome bars and pubs with live music where you can chill out and rock out at night. Drop in Saxophone pub to listen to fabulous rock, blues and jazz bands or in Raintree Pub as it is the best place to listen to Thai folk music.

The Monument has a Victory Point night market underneath the skywalk, there are plenty of clothing shops with cheap prices for shopping.