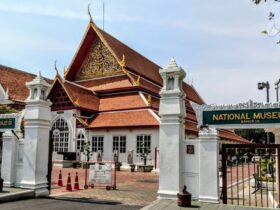 Democracy Monument is placed on Thanon Ratchadamnoen. It’s a public monument in the center of Bangkok.

The monument is dedicated to the Siamese coup d’état of 1932 (also known as “Siamese Revolution of 1932” and “1932 Revolution”), leading to the constitutional monarchy being established.

It is a reliquary statue of a palm leaf manuscript box holding the Constitution of Thailand on top of two golden bowls for offerings above a circular tower of copper 3 meters high, which has a weight of 4 tons on a base in a sphere-shaped shape at the top. The base is raised with small steps. The constitution is safeguarded symbolically by four wing-like structures with relief carvings and tiny fencing encircling the monument. Originally, 75 small cannons were located around the outer ring of the monument.

The wings are 24 meters in height, the same radius as the base of the monument, commemorating the fact that the 1932 coup occurred on June 24. The 3 meter high box symbolizes the third month or June ( April was initially the first month of the year) when the coup happened and stands for the 3 mighty powers (judicial, executive and legislative). In addition, the 75 small cannons around the outside ring of the memorial symbolize the coup year – 2475 according to the Buddhist calendar.

Scan this QR code to add Democracy Monument to your phone

During the military dictatorships, demonstrators often gathered here, calling for a return to democracy, notably in 1973, 1976, and 1992.

Nowadays Democracy monument serves as a rallying point for the new generation of democracy activists.