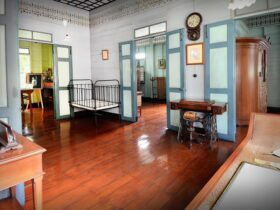 The statue of King Taksin the Great is situated in Wongwian Yai – a large traffic circle in Thonburi, on the west bank of the Chao Phraya River in Bangkok.

King Taksin the Great or the King of Thonburi (April 17, 1734 – April 7, 1782) was a nobelman in the Kingdom of Ayutthaya and later became a major leading figure during the emancipation of Siam from Burmese occupation after the second fall of Ayutthaya in 1767 and the consequent consolidation of Siam after it came under the rule of various military leaders.

The city of Thonburi was founded by King Taksin the Great to serve as the new capital as the city of Ayutthaya was almost entirely devastated by the occupiers. His rule was marked by the many wars; he struggled to deflect new Burmese incursions and to subdue the northern Thai kingdom of Lanna, the Laotian principalships, and the menacing Cambodia.

While most of Thaksin’s rule was occupied by military operations, he devoted much of his attention to political, administrative, economic, and prosperity matters. He developed trade and strengthened ties with other countries, such as China, Britain, and the Netherlands. In addition to rebuilding and renovating temples, the king tried to revitalize literature and a variety of arts such as drama, painting, architecture, and crafts. He issued rules for the gathering and arranging of different texts for the development of education and religious studies as well.

The ceremony to unveil this monument took place on April 17, 1954, and a commemoration is held annually on December 28.

The plaza with the statue is vast and functions as an intersection of highways with a lot of motorized transport. Lots of people use this place for jogging or running. Remarkably, people worship this king as a divine being, placing offerings and burning candles in front of the statue.

There are two more famous monuments in Bangkok – Democracy Monument and Victory Monument.