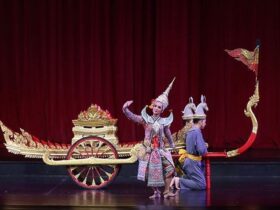 The Temple of Golden Buddha, official name Wat Traimit Withayaram Worawihan or Wat Traimit, in Bangkok, is famous for the gold statue of the seated Buddha. The statue weighs about 5.5 tons and is about 3 meters in height. The Golden Buddha statue was made in the 13th century.
The temple of the Golden Buddha (Wat Traimit) is located in Chinatown, Bangkok. The distance from Hualampong railway station on Charoen Krung Road is about 500 meters. If you are there, please also visit the Chinatown Gate at the Odeon Transport Circle, which is only 160 meters from Wat Traimit.

In the 1930s the statue of the Golden Buddha was taken to Wat Traimit. The statue was covered with a layer of plaster.

In 1955 a vihara was built at Wat Traimit to house the statue of the Golden Buddha. The vihara is a temple with important depictions of the Buddha where lay people come to pray.

While moving the statue to the Vihara, the rope of the crane broke and the statue fell to the ground in the mud. The workers were greatly frightened by the incident and ran away from the construction site.

The next morning, the monks returned to the shrine and found the statue lying in the mud. Some of the plaster had chipped away and the monks could see the glittering gold underneath.
It became clear that the statue was incredibly valuable as it was made of pure gold.

In 2008, the Golden Buddha was moved to a specially constructed three-story building. The building is called Maha Mondop.
On the first floor is the Chinatown Museum, where you can learn about the history of its appearance and development.
The second floor tells the story of the Golden Buddha. Here you can see pieces of that famous plaster that hid its value.

The Golden Buddha statue itself is on the third floor of Phra Maha Mondop.

INTERESTING FACTS ABOUT THE GOLDEN BUDDHA

Polite attire is required, with shorts above the knees for women prohibited. Shoes must be removed and placed on a shelf before entry into the temples.

There is no charge for admission to the temple complex. The fee to view the Golden Buddha is 50 baht. Chinese History Museum is 100 baht for adults and 60 baht for kids,

THE TEMPLE OF GOLDEN BUDDHA LOCATION

It is a huge temple with amazing architecture. The engraved small details are magnificent. Such things take time to take shape, but they always produce extraordinary results.
The Golden Buddha Temple is officially called Phra Phuttha Maha Suwanna Patimakon. Locals call it Phra Sukhothai Traimit in Thai. It is a golden statue of Buddharupa from Maravijaya Attitud, weighing 5.5 tons (5,500 kilograms).