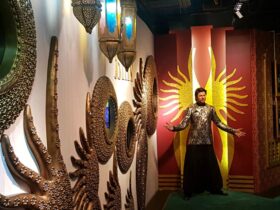 The World War I Volunteer Monument is situated in the northwest corner of Sanam Luang In front of the National Museum.

The Monument is dedicated to the 19 ( not fighting) victims of the 1, 300-men Siamese Expeditionary Force that was sent to France by King Rama VI in 1918.

The monument was designed by Her Royal Highness Princess Maha Chakri Sirindhorn Prince Krom Phraya Risaranuwativong. The monument is a chedi with the applied art style of Srivijaya architecture, which originated from a religious site in central Java called Chandi.

World War I Volunteer Monument is made of white polished stone. The base is a recessed pedestal. In the center of the monument, there is an inscription in black letters on all 4 sides going in depth, which mentions the reason why Thailand had to go to war, along with the names of those who died.

The entrance is free.

Scan this QR code to add the location to your phone

The World War I Volunteer Monument is in the very good old style of Southeast Asia with a deeper meaning. Located near the Grand Palace, opposite the outer city walls in a beautiful green park, this memorial commemorates the horrors of war and its innocent victims.