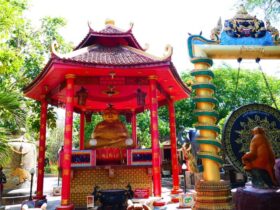 Wat Mahabut was built in 1762, 5 years before the fall of Ayutthaya, in the Phra Khanong district of Bangkok. In contrast to other Bangkok temples, Wat Mahabut is not famous for its historical heritage or old architecture. This temple is known for the ghost of a woman, the legendary Mae Nak.

THE STORY OF MAE NAK

Mae Nak, a woman who lived on the bank of the Prakanong River, was married to the handsome Mak. During the outbreak of war, Mak was drafted into the army. He was forced to leave his pregnant wife.

In the aftermath, Mak was severely wounded in the war, and Mae Nak died in childbirth along with her unborn child. This in itself is very unusual because the dead are usually cremated according to Buddhist custom.

After recovering from his injuries, Mak decided to return home to his wife and child, unaware of their deaths.

Neighbors who knew that his pregnant wife had died in childbirth died before Mak knew it.

Mac returns home, where he was met by his wife, who in reality was a ghost, but Mac had no idea about that.

Mac later realized his wife was a ghost and fled from her to the temple of Wat Mahabut. Mae Nak tried to chase him, but ghosts cannot enter the temple. The villagers undertook an egzorcism rite and were able to bring his wife back to the afterlife.

The full story of the ghost woman Mae Nak can be read on Wikipedia’s dedicated page here.

For fans of horror movies, several films have been made based on this legend.

WHO PRAYS TO MAE NAK IN WAT MAHABUT

In Thailand, there is a selective draft for military service. Young people pray at the Mae Nak temple to avoid being drafted. Because Mae Nak was separated from her husband precisely as a result of the military draft.

People come to the Wat Mahabut to buy a lucky lottery ticket or to receive a blessing to win the lottery and get rich.

Polite attire is required, with shorts above the knees for women prohibited. Shoes must be removed and placed on a shelf before entry into the temple. The rules are similar to all the temples in Thailand.

Please note that it is forbidden to take pictures inside the temple.

There is no charge for admission to the Wat Mahabut.

HOW TO GET TO WAT MAHABUT

Scan this QR code to add Wat Mahabut to your phone

This is a very unusual place to visit and see ordinary Thais who come to the temple to pray in hopes of buying a lucky lottery ticket. You can make merit by feeding the fish in the river near Wat Mahabut.
You can reach this great temple by cab or private car, or by BTS, get off at Onnut station and walk along Sukmovit 77 for 15 minutes.